If you’ve got a receding hairline, a glance at the mirror could throw you off-balance, especially if you take pride in your hair’s beauty. In fact, you might have concluded that the days of your hair being your most attractive feature, are over. But really, are they?

I’ve got good news for you! A receding hairline doesn’t condemn you to a lifetime of baldness- you probably know this already; but yet, you find yourself wallowing in the pool of doubt. Fortunately, that is why this article was written- to reiterate the fact that there are easy ways through which you can prevent a receding hairline; and perhaps, nip it in the bud in case it has begun its activity. But first off…

What is Receding Hairline and Hair thinning? 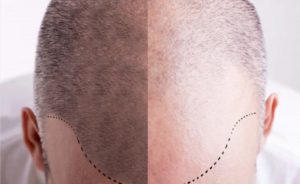 A receding hairline is a term used to describe the phenomenon when hair ceases to grow at the temples and above the forehead of a person and is usually the first sign of baldness. While hair thinning refers to the minor or moderate hair loss which necessarily doesn’t cause baldness. Although receding hairline is more prevalent in men, it occurs both in men and women.

As an individual age, it is normal to experience a gradual loss of hair- mostly above your forehead. In short, hair loss is an integral part of aging. However, sides increase in age, there are a couple of other factors that could skyrocket your chances of having a receding hairline.

How To Tell If You Have A Receding Hairline?

There isn’t a one-way-works-for-all method of detecting a receding hairline. However a receding hairline begins right above your temples, with the gradual hair loss moving backward, but the hair in the middle stays closer to the forehead.

How To Stop Your Hairline From Receding?

Hair follicles are responsible for the replacement of hair once an old one falls off. In situations where the hair follicles become less functional, it becomes difficult to maintain the full hair. Once the process has begun, stopping it might prove a bit difficult. But, there are certain things you can do to keep it in range and maintain full hair as long as possible- which is a kind of great alternative. If you are experiencing an intense hair fall, you might be suffering from a hair loss disease called alopecia.

There are certain substances called antioxidants that help the body fight against stress. Eating a diet rich in antioxidants would actively reduce the amount of oxidative stress in you, causing your hair to age slower. Walnuts, spinach, and blueberries are rich in natural antioxidants. Vitamin A, E, B-12, iron, and zinc are also essential minerals that promote proper hair growth.

Some shampoos, when used, are milder on the scalp compared to some others that strip the scalp of sebum. Lack of sebum (oil) on the scalp would make the hair dry and brittle; leading to hair breakage. Switch to a better shampoo.

Drink lots of water. It helps to keep your hair from being too dry.

How does this relate to your hair? Research proves that stress contributes to hair loss. Designing ways to lower your stress levels such as meditation and exercise could help your hair a lot!

How to Get Rid of Beard Split Ends

Building a Men’s Grooming Regimen in 2020 (With Checklist)